Holy Trinity Romanian Orthodox Church was designed by William Strickland (1788 – 1854), one of the great masters of the early American architecture and one of the founders of neo-classic American style, called Greek Revival.

It was not known until 1983 that he was the architect who designed the church. The research that Professor Jeffrey A. Cohen conducted for the National Register Nomination revealed the information in an 1816 newspaper (Relf’s Philadelphia Gazette and Daily Advertiser, September 21). Reporting the event of the consecration of the church, that took place three days before, the article describes the church as a “neat and elegant edifice” whose “design was given by Mr. William Strickland, of this city,” and whose “execution has done justice to the taste of the Architect.” A special mention is made about William Thackara whose plaster decoration – the article says – “has exceeded any work of the kind in this City” (Jeffrey. A. Cohen, 1983). In 1829, when Strickland was commissioned for the restoration of the Independence Hall, Thackara joined his team again and did the plaster work.

Strickland was a student of Benjamin Henry Latrobe (1764-1820), the first professionally trained architect in the United States. He met Latrobe in 1803, while he was assisting his father, master-carpenter John Strickland, who worked on Latrobe’s Bank of Pennsylvania.He was Latrobe’s youngest and “most brilliant” student (Talbot Hamlin). Two years of apprenticeship were enough for him to learn the fundamentals of architecture and engineering. In 1808, young and ambitious Strickland — then aged only 21 – began his independent career as an architect with the design of the Masonic Hall in Philadelphia (1809-1811, now demolished). This was his first important professional accomplishment. 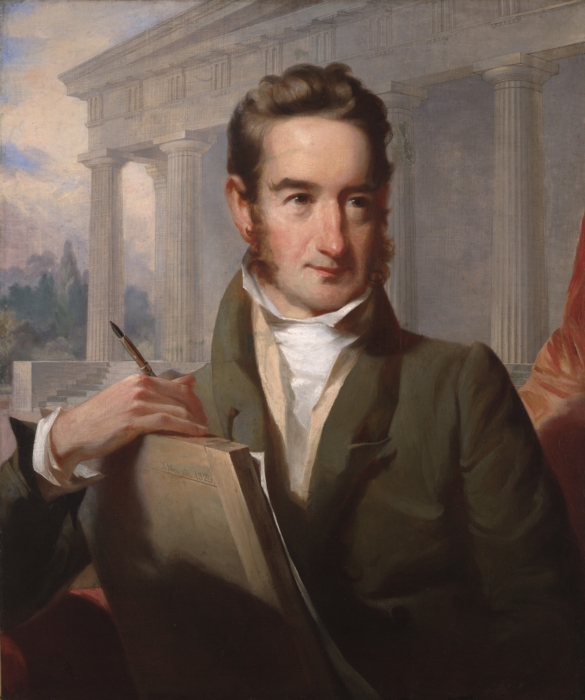 St. John’s Episcopal Church in Northern Liberties (our church) was his second. It was in 1815, when he won not only the commission for St. John’s Church, but also another major one: the Second Bank of the United States (1818-1824). Holy Trinity is the first clear example of what Professor Jeffrey A. Cohen calls “free Neoclassicism” in the United States. It heralded the work which established Strickland’s reputation as a professional architect, namely the Second Bank in Philadelphia. Strickland was only 27 years old then.

These two monuments which luckily have survived intact marked the birth of neo-classic American style. It is worth noting that Strickland won the competition for the Second Bank, defeating his own mentor, Professor Latrobe. His design was inspired by the architecture of the Parthenon in Athens. Considered a seminal work in the history of the Greek Revival movement in the United States, the building is his most representative work and his masterpiece. Later on, the profile of the Bank will appear in the background of his portrait, painted by John Neagle, in 1829, and kept in Yale University Art Gallery.

Due to the unexpected notoriety these two accomplishments brought him, in 1818, Strickland opened his own architecture practice in Philadelphia, and was to be dubbed soon the “city architect”. He designed a large number of Philadelphia’s public buildings, thus playing a major role in the transformation of the city. He was acknowledged as one of the most important architects and engineers of his time. Among his main works, we mention: the US Naval Asylum (1826–33), the US Mint (1829–33—demolished), and the very beautiful Merchants’ Exchange (1832–4), etc.

As the depression of the late 1830s and early1840s deepened, he began to feel the pressure of competition from other architects, including some who were much younger and inexperienced whom he had actually trained. Thus, he began to lose major commissions. This was the turning point in his life. He decided that it was time for him to make a change in his professional carrier. In this respect, an invitation to become the architect of the Tennessee State Capitol in Nashville, must have offered him the right opportunity to do so. In 1845 he moved south to Nashville, where he designed St. Mary’s Roman Catholic cathedral (1845-1847) and the First Presbyterian Church (1848-1851), both in Nashville. His last major work was the Tennessee State Capitol. He passed away eight years later, on April 7, 1854, aged 66, while supervising the construction work of the Capitol. He was entombed in a vault within the Capitol, a last honor bestowed by the Tennessee legislature.